iTel Mobile has introduced a new mobile device called iTel P36, the device was launched in India with some fantastic features. The iTel P36 has a waterdrop notch display design and a selfie camera on top of it with a nice Gradation blue and purple colours which gives the device a beautiful look. 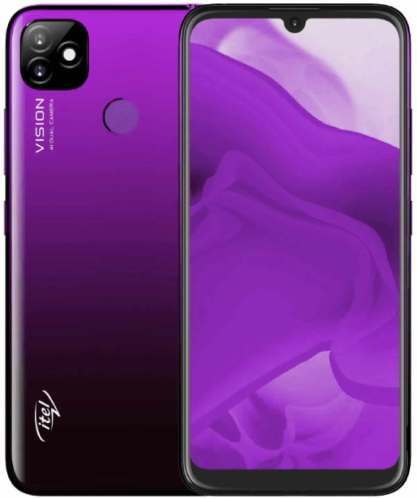 In terms of its design, the iTel P36 has a beautiful body design starting from the colouring of the device and to the cameras and fingerprint positioning. The iTel P36 has a waterdrop notch display which houses the front-facing camera, while the back cover houses the dual cameras, LED flash and the fingerprint sensor placed at its usual position. The screen resolution is about 720 x 1600 pixels, 19.5:9 aspect ratio and 272 PPI density. This device has a scratch-resistant technology and is perfect especially for entertainment enthusiast.

I don’t have to explain much on this, this device has a total of three camera setups that is, one at the front while the two at the back. The back camera consists of 8MP + 0.3MP camera with a LED flash attached to it. While front consists of a 5MP single selfie camera which can be seen on waterdrop notch display.

The iTel P36 features a UniSoc Spreadtrum SC7731E chipset with a Quad-core processor clocking at a speed of 1.3 GHz and ARM Mali T820 MP1 GPU that handles the graphical and gaming aspect of the device.

The iTel P36 has a 16GB inner storage with an option to expand through the use of a microSD card. The RAM of this device is just 1GB only.

Out of the box, the iTel P36 runs on Android 10 operating system coupled with its own customized user interface.

One important fact about this device is that it offers a massive 5,000mAh non-removable battery that can last you up to 24hours when heavily used. The downside is, there is no fast charge technology that comes with it.

iTel P36 do not feature a 4G LTE network but a 3G network, other connectivity options include Wi-Fi Direct, hotspot, GPS, FM radio, Bluetooth and Micro USB 2.0 option for charging and data transfers.

The device is now available for sell in Nigeria and Ghana and it will be selling at a price of $79 which is equivalent to 32,000 naira in Nigeria and 476.49GHc in Ghana.

Download Call of Duty: Legend of War APK for Android