Leagoo M9 is a budget-friendly smartphone device that comes with a lot of fantastic features. So I will advise you if you are looking for a cheaper android smartphone device to buy go for Leagoo M9, the Leagoo M9 run on android 7.0 Nougat which also features a 2GB RAM in dealing with heavy apps or games. These are few features I just give you so let go into full details for this phone.

The Leagoo M9 looks beautiful and attractive on the outward appearance, it is designed with very thin bezels on the display. The weight features a 153g which makes it very portable and light in nature. Its body is made up of plastic and has a dimension of about 148.71 mm x 71.20 mm x 9.75 mm which is pretty good. The Leagoo M9 is currently made up three different colours which are Blue, Black and Gold.

The device features a 5.5 inches display unlike the what we first see on Leagoo Kiicaa power which features a 5.0 inches display. M9 as a resolution of about 1280 x 640 pixels and 260 pixels per density. The Leagoo company has upgraded on their ratio, the Leagoo M9 features a fullscreen aspect ratio 18:9 which is the raining ratio of latest phones in the market today. WOW, the screen protected by Corning Gorilla Glass to help in protecting it from minor scratches and also has a 2.5D curved glass on the display. 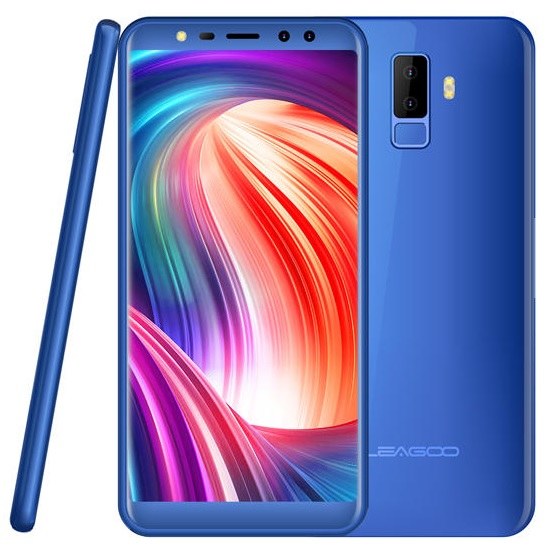 The device support MediaTek MT6580A, the processor clocks a speed of 1.3GHz given it a 32-bit ARM Cortex A7 also the graphics are provided with ARM Mali-T400 MP2 GPU. As earlier said, Leagoo M9 runs on Android 7.0 Nougat operating system, which also comes with the company customize interface  Leagoo OS 3.0 Lite.

The device is packaged with a 2GB RAM in dealing with heavy apps and game which could cost the device to slow down, it also features a 16GB Inner storage the external storage can be upgraded up to 32GB using a microSD Card.

If you are the type that loves taking pictures then this phone is best for you. The Leagoo M9 comes with a dual camera both front and back, the rear camera which is the back features an 8MP + 5MP for taking bright images while the front has a 5MP + 2MP for selfies lovers.

As for the network aspect, it supports a 3G network and doesn’t support 4G LTE network which I find it a bit disappointing but anyways that is, not a problem at all. Leagoo M9 also supports Wi-Fi direct and Hotspot, Bluetooth, GPS